You Are Not Your Testosterone Level 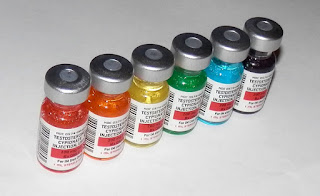 Back before I was on testosterone, I was running under a number of assumptions about myself that--although I tried not to say it out loud--I thought validated my transition.  I could reminisce forever about the things I thought validated my transition (I do have excellent spatial awareness) but I want to talk about one thing in particular:  Testosterone.

Before I ever got tested for my testosterone levels, I was running under the assumption that I had high testosterone for a woman... perhaps even immensely high.  Sure, not on testosterone high, but certainly above average for a woman.  My level?  It was... a touch higher than average.  Just a touch, like you could have accidentally bumped a gland wrong and had an extra tiny spritz of testosterone that day.  Not enough to justify my personal assumption that I was some testosterone-driven monster woman for whom transition to male was the obvious option.

I mean, we say we don't.  We say things like, oh, "you're a man as soon as you say you are."  But there's still this anxiety related to testosterone levels.  Lots of conversations I've had devolved into people puffing up their chests bragging about their high pre-T testosterone levels, but my favorite is the people who think having an average male level of testosterone is bad.  "My testosterone level was only 600ng/dL today and my doctor says it's fine but IS IT REALLY FINE?!" somebody may ask, having probably stumbled on some obnoxious man health blog trying to get cis guys to buy its supplements.  And other trans guys step in to do some damage control because Aidan #12 thinks a level of 600ng/dL means he'll never get a moustache, but the same thing will happen with #13 next week.

(Clarification: There's nothing wrong with picking Aidan, obviously, speaking as a trans guy with a different but equally stereotypical trans guy name).

Testosterone fever has always been a thing in our communities, but the recent cis male obsession with testosterone levels that escaped from bodybuilder culture is making it a hell of a lot worse, aided by the sweep of advertising for Androgel and other testosterone supplements a few years ago.  As somebody in the wider paleo diet community it's getting hard to navigate past all the gross testosterone obsession, including people suggesting hormone replacement therapy in cis guys.  So you have these whole communities of mostly cis dudes who base their entire dietary and exercise lifestyle on the premise that they should let their bodies behave the way evolution pushed them to also insisting they need pharmaceutical HRT because... reasons?  Because they think having a testosterone level under four digits makes them sick?

Obviously testosterone replacement has its place (and one of my goals in life is to get trans guys who need it on it) but the undercurrent here is anxiety over men becoming "feminized," which is nine out of ten times a huge red flag that somebody is a homophobic and/or transphobic concern troll with large pockets of racism from people who equate low testosterone levels with low fertility and low fertility with "white genocide" and other fake concepts.  These are people who attach absurd, non-evidence-based ideas to testosterone levels, like that having lower levels of testosterone makes a man gay (it doesn't), makes him act in feminine roles (it doesn't), or makes him infertile (testosterone replacement actually makes this worse).

The thing is... you aren't your testosterone level.  People didn't even know about testosterone before less than a hundred years ago outside of some weird experiments injecting extracts of dog balls into themselves, so the idea that this is some yardstick of manliness is patently absurd.  You could have a testosterone level of 15ng/dL and it still doesn't mean anything about who you are.

So don't stress out about your testosterone level (whether you're on pharmaceutical HRT or not).  The number is not the goal, the goal is to get the physical changes you need and to get your levels to a place where you physically feel good.

And if you're like me and eventually feel fine at 80ng/dL?  That's also fine.  Don't let that number mess you up.  It doesn't mean as much as you think it does.
at 2:21 PM

First, in general updates, I've written scripts for I think three new videos (including one for cramp bark in my trans male herbal series and an addition to my genderqueer mysteries series), but have been going through a bit of a slump lately due to both personal stress (I lost my motivation to eat well as a side-effect of that DietBet fuckery, although to be fair I exercise a hell of a lot more) and general worldly anxiety (it's the end of September and it was almost a hundred degrees today in Wisconsin, so I'm having a lot of climate-change related angst).  Not that I owe anybody an explanation for anything, but I thought I'd mention anyway.  I'm also sick.  Yuck.

Outside of the stress and sickness there have been some pretty good things going on.  I'm starting to sew clothes (I'm making a cool long jacket with a fox pattern on it right now) and play around with fashion.  Two days ago I did something I've been considering for a long time but hadn't actually done.

I de-grayed my moustache.  With dye.

Now, I don't actually mind the gray of my facial hair at all.  I've had gray beard hairs since I started growing a beard (I hear that's an estrogen side effect but even at peak testosterone it was coming in that way!).  Plus, my girlfriend likes it  But the moustache is a different story, because although I'm certainly cute (in a baby bearish sort of way), the extent to which my moustache lacks color means that it's hard to see I even have one sometimes.  My moustache sort of washes into the rest of my face.

So I went out and got some hair dye specifically made for facial hair.  I started with just the moustache, but decided in the end to do a little sideburn and beard too, although I left the gray on the chin as it was.  Basically anywhere I'd use eyebrow pencil (except for my eyebrows) I dyed a bit.  And I really like the result.

Keep in mind that when I want to look put together what I usually wound up doing was use eyebrow pencil and dark tinted moustache wax to get it to stick out.  The problem is when it's sunny or otherwise bright, you can see right through the moustache and fixate onto the eyebrow pencil on the skin, which kind of sucks, and moustache wax is its own pile of irritation.  My moustache is trained enough where I shouldn't have to wear moustache wax for an average day, but I wind up doing so because otherwise it's invisible.  This way I can use my homemade non-tinted wax and decide not to use it sometimes.

I think I left it in a touch too long.  I got a light brown color, but beard and moustache dye runs very dark and leaving it in too long makes it even darker.  It's toned down now so it doesn't look awkwardly black, and matches pretty well.

Oh, fun fact, I've been off of testosterone and back on my natural estrogen for well over a year now, and I'm still gaining new terminal hairs, something I didn't expect to happen anymore.  The old beard's still trying to fill in between the moustache and little pointy tips like the trooper it is.  I guess I shouldn't be super surprised by this as the women in my family also tend to gain more terminal hairs on their faces as they age, but it's like... the same rate I'd been gaining new ones before.  The point is, other than being a little more emotionally volatile and losing a chunk of sex drive going off estrogen changed less than I would have expected.
at 9:06 PM

If you like what you see at this blog, you can kick some money to my top surgery fund using my cashtag $Setkheniitw or my Cash.me link.