I haven't yet finished my "raw camping stuff" essay, so this is wildly out of order, but I wanted to write my "Little Things of PSG" essay, which goes over all the stuff that maybe doesn't need a whole dedicated essay but was interesting enough for me to talk about nonetheless.

The Gnome Exchange - Every year somebody called "Gnome" hosts a Gnome Exchange, where you take a lawn gnome and put it at Gnome Camp to party with other gnomes.  Then you take a different gnome home.  Last year I accidentally got to participate in the Gnome Exchange, because in a rush to get going I shoved my big orange crate of magickal tools in my car and took them all along, and there happened to have been a little stick gnome in there for potted plants that I'd used as an elemental symbol like five or six years ago.  I also bought a little gnome at Goodwill because I know I'd be taking my girlfriend and I wanted her to be able to participate in the gnomy goodness.  I took a "cool gnome" who is talking on a cell phone and wears a bandana and jean chain.  Nakiiya grabbed one whose foot had broken off who had a gardening trowel and was petting a squirrel.  I mentally questioned this decision, but when I got home I got some air-dry clay and gave him an amputee's stump (I could in theory have created a new foot, but I like the disability-visability angle of making him a happy amputee).  So now he's probably the best gnome. 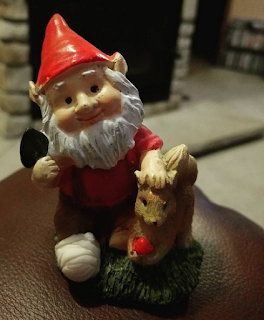 Hekate at the Crossroads Ritual - I like acquiring sort of side-relationships with the Goddexes of my Pagan friends and partners, as a sort of "extended family" if you will, and since one of my best friends is a Hekate devotee I decided to go to a Hekate ritual.  It was mostly dance and movement based, very few words at all.  We were instructed that we would "just know" when it was time to move.  This was a really cool and moving ritual that I teared up during more than once.  Early in the ritual my shoulders started involuntarily swaying, I feel like I was low-key hypnotized.  At the climax of the ritual the woman who was putting this ritual on went up to each of us and looked us in the eye, giving us non-verbal messages.  I don't know if she actually intentionally invoked Hekate, but I certainly felt like I was looking into the eyes of Hekate.

Magickal Gift Exchange - I love giving gifts and donating beautiful things and seeing people's reactions.  The gift I received was a little polymer clay kitty that is now on my ancestor shrine next to my cat Sherlock's urn.  The gift I gave was a woodburnt spoon with a pentacle design.  The woman who got it seemed very excited and explained that she hasn't been able to cook in a while but was actively planning on doing it more, so it came at a good time in her life.  I'm thinking next year I want to make something small, beautiful, and yet poorly wrapped because I like the idea of somebody thinking they were too late to get any good gifts and suddenly bam they get this gorgeous gift.  Jewelry would probably be good for that, or maybe a small pewter statuette.  I always make rather than purchase my gifts for this, because I'm a reasonably competent artisan.

Raffle - I feel like I need to start donating cool stuff to this.  There are a lot of prizes and not all of them are great.  I do, however, love winning things and was excited to see that I got three prizes.  The first was a butterfly necklace that I gave to Nakiiya.  The second was a sewn drawstring bag that turned out to be great for my until-then unbagged set of black maple runes I got at my first PSG in 2014.  The third was a dress sewn from tie-dye sarongs, including both a top and a bottom.  I'm not really a dress person and feel like I may do something else with the top (the skirt portion I would wear because I like wearing just sarongs around my waist at PSG; longer than my usual sarong but who cares?).  Fun note:  I put the top on to try it out when I picked up the prize for the first time, and noted as it began tearing that it "was not made for my figure."  Somebody I don't know responded "If you like it and it fits it's made for your figure!"  It was cutely supportive but it really wasn't because of the feminine style (I could always use it in between-worlds work if nothing else), but because putting it on feels... fragile.  Like I'm too big for it but somehow at the same time I'm too small.
Awakening the Black Bull Ritual - I couldn't go to this because I had a work shift, but wanted to note that when I got there to view the remainder it was a bunch of people running in a circle and shouting, after which they all (all genders, and there were at least three represented) pulled out their breasts and symbolically breast-fed a goat skull.  I strongly regret not going, because weird shit like that is in my wheelhouse, but you know, maybe they'll be back next year.

The Bast Cat Ritual - I went to this one last year and loved it.  It's super dorky... and I mean that in the most positive way possible.  I'm talking people calling elements with cat toys, blessings with catnip and milk, wearing kitty masks, prowling around meowing.  And despite being so dorky, it's very moving at the same time, as people always talk about their sick and deceased kitties and we all send energy for them.

The Rainbow Ritual - I cringed a bit because they used colored cornstarch (my sister in law recently acquired a very bad corn allergy--to the point she cannot go into a movie theater--and I'm hyper-aware of allergy issues at events like this).  The ritual itself was lovely.  They assigned a color to each letter in "LGBTQA" (I was purple, representing trans folks, this was negotiated before PSG) and we each wrote our own parts.  I wish the representatives were more gender balanced, but they really had to go with who volunteered in the group.

Food Trucks - They were better than last year, but honestly I didn't have as much of a problem as other people did with it last year.  To be fair, I'm extremely patient with people in food service and very annoyed at people's entitled behavior with employees, so I was viewing a lot of the complaints through that lens.  One of the food trucks had excellent, inexpensive food (Nakiiya and I had ribs twice and cheesy chips, they were very inexpensive and delicious!).  The other was lackluster... I laughed when somebody at the first aid tent came with a "mushroom burger" she had ordered at that truck and found that the mushroom was not a portabella cap (which is what one would expect), but just an average-sized button mushroom... one of them, smooshed into the center of a bun, with no fixings.  Seriously.  I wish I had a picture of it.  It was hilarious.  I did eat their a couple times and did enjoy their root beer floats.  The last day the mushroom burger truck left and a different truck took its place.  I only ate their once... not a lot of food for the price, but it tasted good, and food trucks are expensive anyway.  Oh, and two days they brought an ice cream truck in, which resulted in hoards of grown adult Pagans running down the street full-bolt to get in line.
at 1:15 PM