I was able to get my bike all fixed up (new tires, adjusted the brakes to get rid of a weird sound they were making, added a back rack), strapped a basket on it, and took it on an herbal run.  I'm creating some herbal routes that took me to places I didn't actually know existed in this area... including a trail that led to a more wooded trail that I'll be visiting more often due to a lot of promising herbal terrain and just generally gorgeous scenery.  The non-wooded trail has a lot of ditch weeds, which are my wheelhouse. 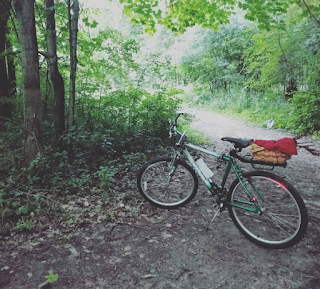 Gorgeous bridges, too, over rushing waters and some less-rushing waters that clearly are being used as a swimming hole by local folks. 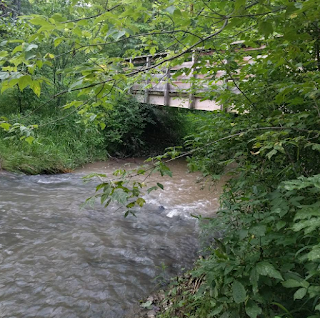 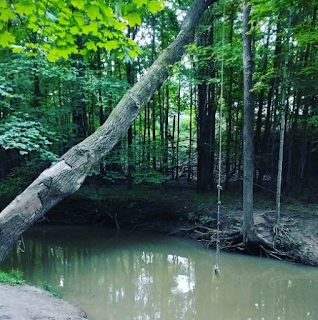 There are also fields and fields of jewelweed, a highly healing plant that is used as a cure for poison ivy and other skin conditions (it's in a lot of soaps made for poison ivy dermatitis). 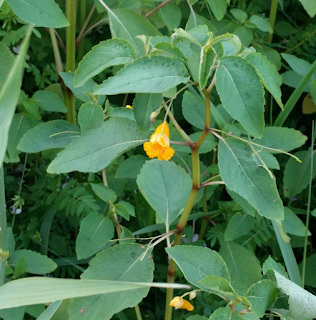 I saw a one-antlered deer that was staring at me through some grasses and weeds that was stunning. 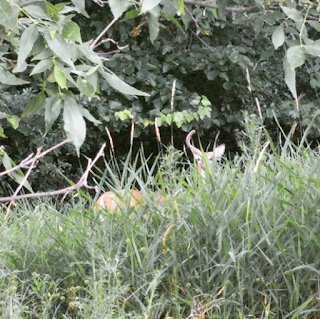 Anyway, I just learned about ghost pipe--a plant that's really popular to harvest and tincture despite starting to become rare and being a plant we cannot cultivate--not that long ago, meaning I now hear about it everywhere, and I wanted to talk about it because it's a great example some toxic attitudes that permeate herbalists.  And I don't mean this as a finger-pointing exercise... these are attitudes that permeate in herbalists because they permeate through the rest of society, and I am prone to them just as anybody else is.  I mean, this is basically the reason I started a pine powder regimen, isn't it?  Yes, pine pollen is abundant and can be collected in my bioregion, but that doesn't mean it wasn't marketing hype that made me initially start taking it.  So these toxic attitudes are things that we all need to be working on, even if we think we're ethical and good people.

"I feel spiritually called to harvest ghost pipe" or "The plant told me I could harvest it," or--ugh--"I have been called by the spirits bring this plant to the masses," is likely bullshit.

As a bona fide spiritual person who talks to Goddexes and spirits (including plant spirits) and tries very hard to listen for when they speak back, this is one that requires some serious tough love:  The spirits of plants that are being actively overharvested are not giving you permission to pick them, you are just confusing your selfish desires for spiritual messages.

This is an especially important thing if you are new at listening to spirits and deities, because many of us spend years trying to learn to sort out our own stream of consciousness from divine intervention and still wind up having to really think about it when it happens.

One thing I am always super suspicious of is when I think I hear spirits telling me I should go ahead and do something I want to do but know has serious ethical ramifications.  There's a very good chance this is your id--which is looking for immediate gratification without concern for consequences--trying to convince you to do something you know deep down is wrong.

But let's say that this message really is real, and that this plant spirit is really, genuinely saying it's OK for you to harvest.  Have you ever had (or been) a friend that was really easily taken advantage of, like you could ask zir for anything and ze would exhaust zirself and expend more money and time than ze had in order to do what you asked without ever saying no?  Just because somebody consents to something doesn't mean it's automatically ethical to do it.  Finally, keep in mind that due to a lot of factors plants aren't necessarily used to people making medicine out of them anymore, they may very well not be experts on the commodification of nature or the epidemic of overuse going on.

The idea that these plants exist only for us to use them is extremely anthropocentric.

Herbalists can acquire some damn weird ideas about plant medicine.  There are folks who strongly believe that if we just look hard enough we will find easy, natural cures for literally every malady or condition in the plant world, because it's part of a pseudo-creationist worldview they have in which every cure is already provided without scientific achievement.  A corollary to that is the idea that plants exist for us as humans to make them into medicine.

Even if you have a belief somewhere that plants intentionally have healing properties through some spiritual world clockwork, it's extremely important that you try to avoid the belief that these plants exist only for us.  Life on earth is a big web of interactions; the same plants we use for medicine may be used by other animals for food or habitats or even their own medicine, they may protect other plants or provide nutrients for them.  So although it is our natural right to use plant medicine, they don't exist exclusively for that purpose, and it's irresponsible to imply that they do.

Buying and selling a plant like this is even worse.

People traipsing off into the woods harvesting the aerial parts of ghost pipe for personal use might still have ethical ramifications, but the real problem comes in doing so when there is a huge market for the stuff.  There are folks picking and purchasing pounds and pounds of this stuff to make into tinctures that are purchased by new agers largely because the tinctures themselves are pretty and purple.  Said new agers could have gone out and picked a small amount to make their own tinctures and left the purchasing to folks who have access issues with getting out to find them, but instead there's a massive market for them.

I'll be writing something someday about the "no ethical consumption under capitalism" idea that permeates social justice spaces right now, but the gist of its relevance to that is this:  Ethical purchasing is bullshit, but what isn't bullshit is not purchasing at all when you have the ability.

Furthermore, although there are certainly small dealers of ghost pipe tincture who pick and tincture it themselves, there's a good chance this could turn into the next American ginseng where people are going out and picking it only because they want to sell it to corporations.

"But what if I really, really need it?"

This is another very anthropocentric, egocentric way of looking at herbs.  Ghost pipe's scientifically demonstrable medicinal value is quite dubious, and many folks use it for the spiritual messages rather than any tangible healing use.  It is a good plant to get such messages from, tapping into the hidden network of the forest as it does, but it just doesn't have enough objective value to justify telling people they should "only" pick it if they "desperately" need it, because there is no such thing as desperately needing ghost pipe.  There is no desperate human need for this plant, and there are other more abundant plants that you can harvest instead.

And for that spiritual connection stuff?  You're really better off working for it while its roots are still in the ground, and leaving it there when you're done.

Rarity does not equal usefulness.

One of the reasons I'm into explicitly bioregional plant medicine is because the herbal communities I first started learning in were into exotic and rare plant medicines.  They would import something from China or India when they could have been creating a thriving local medicine culture instead, or they would go for the rarest plants they could find because abundant plants were not cool enough.  Ghost pipe, as it becomes rarer while also becoming more popular, is a part of this category.


If you live in an area with loads and loads of ghost pipe (as areas like this still exist), I'm not going to press you about taking a few pieces to make tinctures.  But I'm willing to bet most of you aren't, and if you're picking this plant or considering it I would encourage you to seriously look at your wildcrafting ethics.
at 12:11 PM