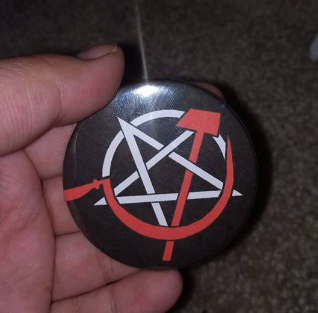 For DIY Monday today I made a bunch of buttons.  I was looking at the RATPAC logo--a combination transgender symbol and hammer and sickle--and thought "man I wish there was a pentacle like that."  So what did I do?  I made a symbol with a pentacle like that.  And then I made it into a button.  It turned out wAY better than I expected it to, like it's gorgeous and I'm really proud of it.  I made enough for my commie Pagan friends and we'll see where else I go with it.

Afterwards I decided I was going to make a bunch of other buttons for me to wear at Pridefest when I go on Sunday.  I have a very love-hate relationship with Pridefest... I go to see people who I don't get to see very often, and because like most people I enjoy, you know, fun, but it's also a swarm of really nasty queer behavior (and not in the way cishets would assume).  One year I went there I not only got sexually harassed multiple times for wearing furry garb, but when I got to my car somebody had laid a used condom on it, and that's just personal stuff... the insufferable cop humping, nationalism, capitalism, etc. are grating.  But, well, nobody's perfect; I guess I'm my own problematic fave. 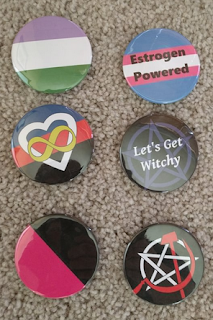 I made a lot of buttons, it just remains to be seen which ones I'll actually wear.  The shirt I intend to wear to Pride already features a pentacle with a pansexual pride flag on it, which I'll totally be wearing if it's comfortable and not horrendously baggy (like I said in a recent entry, I jumped a shirt size recently, and it is a particularly big shirt... if I settle on a weight and am reasonably certain I'll keep that weight off I'll probably modify it teenage-girl style so it fits again).  I definitely want at least a polyamory symbol of some sort and something identifying me as transgender, because although trans people tend to be able to at least kind of recognize that I'm trans, cis people tend not to (it's the luxurious moustache, of course).

I'm not sure what else I'll wear... I like dressing particularly queer at Pride because I don't get that many other chances to do so out in public!  It'll also be my first Pride since re-obtaining a genderqueer identity, if I remember right, so that's kind of important to me.

Oh, side note, people were talking about cops at Pride (not just locally but everywhere, considering several Pride events are starting to ban cops from marching or attending in uniform) and I wanted to throw my input in there, which I'm sure will be unsurprising to anybody who is aware of the radical nature of my queerness.

Years ago I went to a Pride event that was being counterprotested by literal Nazis.  I showed up looking particularly queered up and watched when shit went down outside the Pride gates.  The Nazis of course were going on their usual babble, being "nonviolent protesters" while their speech indicated that, yes, they wanted us all dead and were proud of that fact.  There were cops there, of course, too.  Eventually a group of radical queers came and started throwing water balloons at the Nazis.  I kept my distance, photographing this, only to have a cop assault me before running off.  It happened so fast that I kind of brushed it off, not to mention there was nothing I could have done, but the more years pass the more I realize how fucked up the whole thing was.

Mainstream gays tend to believe that when cops show up to Pride events, they're there to protect us from people who wish to harm gays.  The reason they show up is actually for the opposite reason:  Bigoted right-wing groups have a well-known strategy of harassing people until they fight back, then suing police departments for not protecting them from us meanie leftists.  So wherever they protest, there will be cops... not because right-wing bigots are violent (even though they are), but in order to protect them from perceived violence on the left.

Cops are almost never there to protect us.  They are there to maintain the right of bigots to harass us and to police our own communities.

The cops I have seen at Pride have done basically nothing except protect bigots, intimidate people, tell trans people to use the wrong restroom, and police totally legal forms of expression.  They are not there to protect us.

Anyway, since I'm totally proud of that commie button design, I thought I'd make the picture itself available to you.  I'd strongly prefer you not use it on a printer site like Cafepress but you are free to use it on radical literature, as a magickal symbol, on handouts (if you make your own buttons), or for fundraising for radical efforts, and yes, you can edit it: 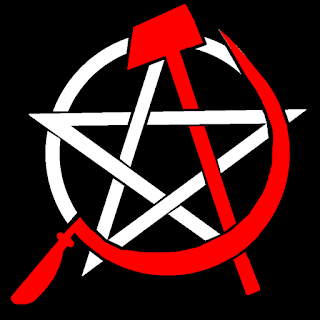