This post is part of a series originally called "30 Day LGBT Challenge" which asks queer-related questions to be answered during Pride Month.  The original questions can be found here.

Day 20:  Maureen or Joanne? (Or your favorite Queer show or queer-positive show).

This feels like almost a dated reference?   Do queer kids still watch Rent?

I like Joanne and Maureen for different reasons.  Maureen's fucking obnoxious as a performance artist (she just tries too damn hard to be deep and symbolic), but as one of those folks bisexuals resent who really does want to be with guys and girls and others at the same time I identify with her in a way (although would submit she should totally try polyamory).  Joanne does a lot of good activist work as a public interest lawyer while also being a big fucking hippie lesbian, which is fantastic and crush-worthy.  She is also more my type as far as physical attractiveness goes.  I mean, god damn, look at her: 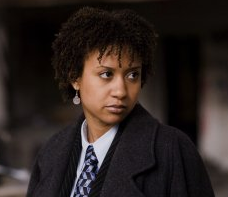 As far as my favorite queer positive show?  I'm super upset about the cancellation of Sense8 from Netflix.  It was like a gold standard for a queer-positive, trans-positive show.  There are some things I would change (I would ditch white savior cop, for instance) but the story between Nomi and Amanita is possibly my favorite trans-related story arc of all time.

Here's the thing:  All the other sensate characters are in these tangled love plots that involve them wrestling with whether or not they should be in the relationships they're in... Kala is all torn about her marriage because she doesn't love her fiancee, Lito's trying desperately to hide his sexuality, etc. etc.  It would have been an easy cop-out for them to make Nomi's story just as tangled and go the tired route of putting her through the drama of trying to find a partner who didn't hate her trans status or who was conflicted about it or some other Crying Game bullshit, but instead they gave her a queer woman partner who sticks up for her, protects her, and is solidly in love with her without any contradiction.  I don't think people give Nomi and Amanita's relationship nearly the credit it deserves for being as incredibly trans positive as it is!
at 6:54 PM