This post is part of a series originally called "30 Day LGBT Challenge" which asks queer-related questions to be answered during Pride Month.  The original questions can be found here.

I really object to the use of the word "LGBT" here, which is exactly why I left it.  Did somebody really just go through this whole question set and then just replace "gay" with "LGBT?"  Because not all of my relationships look "LGBT" to outsiders.

The first boy I slept with as a queer person I would prefer not to post pictures of in that respect.  We're not secretive about it or anything (just yesterday we were joking about his dick size and my humping style) but it just feels weird to enshrine it like it was A Relationship.  Plus he makes faces in all his photos.

I have no pictures from my very first relationship--which was same-sex for like a couple months after I came out--also he is an asshole and I would not post them if I did.

My current relationship is a queer relationship that looks like an average hetero relationship from the outside.  I've posted this picture recently but we're super cute so: 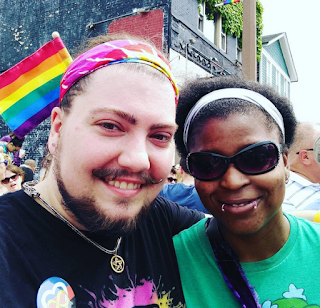