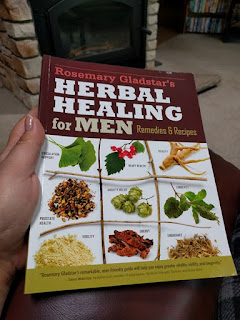 I received a book I forgot I'd ordered: Rosemary Gladstar's Herbal Healing for Men.  I have a couple other Rosemary Gladstar books, including her earlier book for women, which I actually purchased at the same time (the men's edition just came out so I'd pre-ordered it).

I'm really interested in trying the powders because I think they'll be easier to take than herbs typically are for me.  I love herbs, but I tend to take them topically rather than internally, and only on an as-needed basis, because... well, they're annoying.  Tinctures are easy because you can put them in beverages, pills I can take with the rest of my meds, but things like teas and infusions I really forget on a regular basis.  So I'm thinking I'll make some of the powder mixes in this book just to be a regular addition in my shakes.

Herbalism for trans men is unfortunately a bit complicated as a lot of stuff is meant for "the male system" by which they mean cis men's reproductive systems.  This book, to be fair, has a lot of stuff that really isn't about that, it's more about things like heart problems, anxiety, headaches, and "potency" (the latter is kind of used to imply "the male system" but a lot of it is sufficiently vague to be used for trans men as well).

I'll probably mark up this book with little notes about stuff that trans men should be avoiding at various stages in transition, but I'm looking forward to reading it.  I've also decided that my "personal project" for PSG (thing I'll do on the off chance I have extra time and am not being lazy) will be to sort through these herbalism books to decipher which of them have said contraindications.

Note:  When this update was first written there was a whole section on dieting here that has since been redacted due to the acknowledgement that it was turning into an eating disorder.
at 10:49 AM