Perhaps you've heard of the fragility of masculinity.  This is a concept in which even the hint of a "feminine" thing touching a man will surely cause him to shrivel up into pink dust, never to be considered a Real Man again.  It's very big in advertising, where products that could easily just be gender neutral are separated into "men's" and "women's" versions, with the "men's" versions reassuring us how Manly and Not Delicate we are.  Dr. Pepper Ten is a great example of this trend.  People associate "diet" drinks with women and femininity, so they went to the obvious extreme to point to the dude market.  It's not a "diet" drink.  I remember from their radio advertisements that they marketed this as an excuse to eat more bacon rather than a way to lose weight. 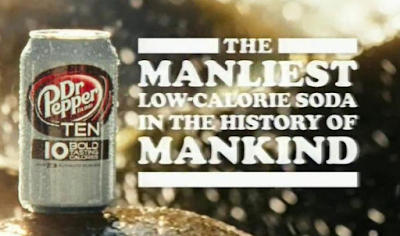 When reading discourse on fragile masculinity, there's an implication often made that this is a cis male thing.  Either "cis" is written as an explicit qualifier, or it's just kind of assumed that trans men run by different rules, that our histories being assigned female make us understand intuitively how ridiculous all this is.

The problem is that it's not true.  Trans men also have toxic, fragile masculinity, in a form that tears a lot of schisms in our communities.

Before I continue, I should mention that this is a subject that requires a lot of nuance, because there are differences in how and why cis men and trans men express masculinity the way we do.  Back when I didn't quite pass well yet, for instance, use of explicitly manvertised products was a way I coped with not passing, and on a level I probably thought it helped me pass.  Having people read me as female because I used a Chapstick once (a thing that literally happened) makes things like some ridiculous lip balm that's "engineered for men" look more reasonable.  I even still have an Axe "detailing tool" that I wash with every morning.  It was and continues to be silly but in its own way therapeutic, and I'd like to remind you that cis people will zero in on any shred of femininity left in you like it's a cancer that'll just keep growing and growing until the façade has broken and you're a girl again.

Because of this, I'm not going to focus on trans men's personal use of things like this, which has a lot to do with the expectation placed on trans men to be purely and perfectly masculine.  I will, however, talk about the attitudes common in our community that people don't talk about enough.

So recently on Tumblr, as a part of its insufferable 💮🌸everything is so v-a-l-i-d🌸💮 culture, there was a post talking about how we need to learn to accept masculine trans men.  "Not everybody wants to be a princess boy!" it supportively explained, "some trans men just want to be men."  This is one of those statements that is uncontroversial to a fault... something you could reply "well, obviously" to without much thought.

The problem is that... well, it never really was that controversial, at least within the trans male community.  You don't pop into an FTM-only forum and find people going on about how annoying it is that there are so many masculine trans men, asking them to stop posting photos of themselves in hunting gear or suits, insisting they shave their beards or put on more makeup to fit in.  Desire for more rather than less masculinity is the default in our communities.

And we know exactly why these guys are leaving because they can't just leave, they have to whine about it first.  They leave because they see like two makeup-related posts and hate that they can't point out that the posters don't "pass well enough" without people telling them to knock it off.  They leave because they think "real men" don't need trigger warnings and refuse to post them.  They leave because nobody wanted to deal with their extreme misogyny, such as a guy I watched pitch a fit because people didn't want to take his patriarchal dating advice.  Trans guys whining that sexism and misogyny don't exist because people are still mean to them specifically or they have to pay more for auto insurance now or something.  And the truscum... Jesus.  The number of people going on and on about how dysphoria is what makes you trans and so anybody not getting medical intervention isn't trans (it isn't and they are) is astounding.

They wind up creating their own spaces, which they often (but not always) run as an echo chamber of trans-MRA truscum filth.  Not all masculine-oriented trans forums are filth, of course, and there are legitimate reasons why somebody would rather stick with other masculine trans men than general-population folks (maybe they're triggered by makeup or something).

But that's just the thing:  Masculinity isn't inherently toxic.  None of the masculine accoutrements is inherently toxic or indicative of fragility, you can be the guy who wears the big beard and the flannel and even the fedora and not be a terrible person, and people know that.  But assuming that other trans men must conform to that, picking on people who don't, and being a sexist pig are toxic trash that we should not be condoning at all.  That's what people aren't accepting, not masculinity.

And we sweep it under the rug--like, a lot--every time we talk about toxic masculinity as if it's the exclusive domain of cis men.  It isn't.  We need to work through our problems, too.