I have a cold, which really sucks because it always derails any progress I've made.  I start thinking thoughts like "I'm sick I can't possibly stick to my diet right now I need to heal," an ironic idea because eating non-compliant food makes me feel sicker.  I didn't do too bad by any means, but I did drink some sugary stuff and eat some wheat tortillas (I normally asked for corn but the server at a Mexican place assumed I wanted flour and I was in too sick/shy a mood to say anything).  This resulted in some really vicious gastrointestinal problems.  I didn't have the antacid issue but I did have very painful stomach cramps and some other more embarrassing issues.

All in all, though, considering how often I would cheat beforehand, a good two or three weeks of fairly strict primal eating and one slip-up involving a sweet tea and three flour tortillas is not a huge deal.  I also, for what it's worth, turned down a heck of a lot of food during this same time period, including a lot of free food, which is my kryptonite.  I'm talking cake, breaded fish, candy, the whole lot.

The sickness I've been dealing with by taking garlic in pill form (and in non-pill form), extra probiotics, noodle-free chicken soup, and Dayquil when I need it.

I also made a rummage sale purchase.  It's something I've been looking for cheaply for ages: 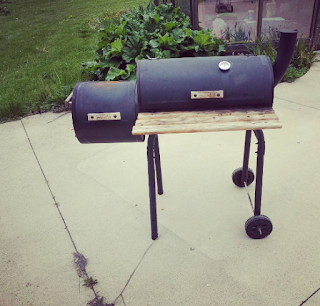 See, I do a lot of slightly-more-complicated-than-usual DIY stuff, including stuff like making my own bacon, which I like smoking.  I've been doing this on just a regular grill, like one you'd take camping with you, which is really hard to regulate heat-wise and makes it easy to overcook stuff.  So I was looking for a smoker, something with a side box so I wouldn't basically just be grilling but with more smoke flavor, and in spite of having looked around pretty much everywhere for one of these damn things where do I find one?  Two blocks away from my house.  And it was great serendipity that this happened as I usually work on Fridays, happened to have had a day off for working Sunday, and was driving around with my mom at the time.  This meant I not only got a smoker for ten bucks, but mom was able to transport it in her truck, and it was super close.

I already made some bacon in it that I think turned out good, as well as some ribs.  I didn't actually finish the ribs in the smoker, I put them in the oven after a while because I was already hungry and didn't have several hours, but man did it ever make them delicious.

I also, due to the Gander Mountain financial troubles, got a really inexpensive electric meat grinder/sausage maker.  So my next project I think will be venison bratwurst or maybe even hot dogs, probably smoked because, darnit, everything's better smoked.  I also found out that it's possible to make black garlic--something I've always wanted to try--in a rice cooker, so I may have to grab a dedicated rice cooker I left at my parents' house for that.  I'll also probably do it in the shed as it apparently smells pretty strong.