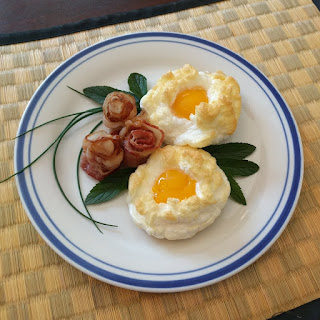 
I learned about the new food fad that is "cloud eggs" (where you whip egg whites to stiff peaks, put them on a baking sheet, sink the yolk into them, and bake them) and had to try it because it's not often there's a food fad out there that is 100% something I actually eat.  I almost caved and ate avocado toast recently--out of spite--but I didn't, and my experiences with paleo "bread" are so terrible I probably won't.  Maybe with some rice-based bread on a day I feel like cheating on paleo?

I garnished my cloud eggs with some bacon roses, chives, and mint leaves and gosh is it ever gorgeous.  One of the prettiest plates of food I've made in a long time, and I make a lot of beautiful food.  Problem:  They don't taste nearly as good as basically every other variety of egg out there.
Some stumbling blocks I'm running into... well, they're not the worst stumbling blocks ever.  One is my old Easter candy, which I got in the midst of a post-Easter binge.  There's very little left and due to very deep scarcity issues from growing up poor it's hard for me to throw it away.  Maybe I can find somebody to give it to.  Even if I don't, it really hasn't been my problem.  It's so rich and my tastes are starting to get so acclimated to non-sweets that I can't really binge on it like I used to.

The other thing that's been tripping me up, oddly enough, is rice.  On a paleo diet grain is forbidden, but both among paleo eaters and especially for me, the Big Bad is really wheat, with many of us occasionally eating white rice because it's polished from all the anti-nutrients and gut-irritators paleo teaches are the problem with grains.  Because it's so innocuous compared to wheat, white rice tends to be my biggest "minor cheat" food, meaning in theory I allow myself to eat it one day a week or so (usually Monday), hence why I was able to eat that lovely green curry, or the occasional sushi, or a carnitas bowl at Chipotle or something like that.  This is fine, but I'm starting to talk myself into eating it more often, which isn't good.  I did get to pat myself on the back yesterday because I went to Chipotle fully intending to get a bowl (including white rice) and like three seconds before ordering pulled myself together and got a salad without rice or beans instead.  I was very worried I'd feel deprived, because I'm a creature of habit... I tend to go to restaurants and order the exact same thing, so shaking this up by getting something primal-compliant or choosing not to eat something that comes with the dish that isn't primal-compliant is a stress-inducer for me.  I always feel superhuman when I'm able to do it.

I did not feel deprived.  The salads are pretty much as tasty as the bowls.  After all, guacamole  and pork are certainly compliant enough, and they're the good parts of the meal.