On Being An Animal In A Zoo

There's a big critique people use trying to "debunk" the paleo diet.  This critique goes something like this:
All of these are true, and in fact, most of us don't really want to go back to a pre-agricultural lifestyle (outside of some hardcore rewilding fanatics).  I'm somewhere in the middle... I genuinely do want to mimic pre-agricultural conditions as much as possible, excepting of course the lack of modern medicine and the relatively high risk of life-threatening injury, but I don't have the ability to go move off to some sort of primitive lifestyle commune... I work on computers all day!  And I like my modern conveniences... maybe we won't have them forever, but I'm going to enjoy them while we've got them.  So what's a modern caveman to do?

My favorite way to envision it is this:  You are like an animal in a zoo in which you are also the head zookeeper.

Zoos are never ideal for animals, because they didn't evolve to live in cages (OK, some do better than others, and there's less risk of being eaten, but we're talking generally here).  But at the same time, not all zoos are the same.  When I was a kid, there were two zoos that I went to every year.  One of them had large enclosures with trees and rocks multiple animals living together in their own ecosystem.  As I grew up, the enclosures got better and better.  The food got better and better, too, with less weird animal kibble and more whole foods.  Some zoos take this to greater extremes, with predators chasing after hunks of meat stuck to tracks, or being fed excess giraffes to the horror of people who don't understand animals apparently.  The other zoo I went to, although I didn't register it at the time, was a terrible roadside zoo.  It specialized mostly in local wildlife, but that's about where the environmental appropriateness ended.  It had black bears in cages barely bigger than they were, and charged guests to feed them Charleston Chews through the chain links (no, seriously).  There was a large pen for a herd of deer... I distinctly remember riding on one.  Wait, I have a picture, I'll get it... 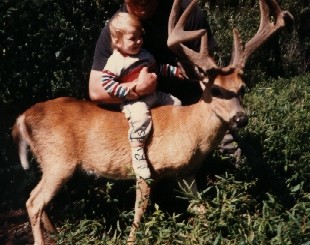 Anyway, this zoo has sick animals.  There isn't a bear there that knows how to bear, or a deer there that knows how to deer.  Most of us, in industrial societies, are in that second zoo.  We eat things that aren't natural to us.  We get stimulated in ways that are not natural to us.  We don't sleep right.  We don't stand or sit right.  Our living spaces are stressful.  We wind up with medical conditions we just assume are normal.

But it's not possible for us to just go back and live wild... the skills that requires (toolmaking, gathering and hunting food, finding water, etc.) are endangered, and besides, most of us have bodily damage for living this way so long, not to mention giving up modern conveniences just plain sucks.  So most of us will be destined to be zoo animals the rest of our lives, but we do have the opportunity--being our own head zookeepers, after all--to make our zoos the best damn zoos we can, which can mitigate a lot of that damage.

This is something people in the paleo diet and natural health communities do all the time, and it's these things that people often point to when trying to debunk them. "Why do you need this supplement if it's 'natural?'"  "If you evolved to walk barefoot why would you need shoes that simulate bare feet?"  "But all plants have been modified by agriculture though!"  "If you're so natural why would you wear blue-blocking glasses instead of just not using screens ever?"

The answer to all of these is that our bodies expect types of treatment that they cannot get through the way they evolved to get it.  There are some nutrients we have a very hard time getting living in modern conditions.  We are legally blocked from going without shoes in a lot of places.  There are too many people to forage for all of our plant foods.  Living without screens makes it hard to keep in contact with people or keep employment.

So there are two options:  You either give up and just accept that the wreckage done to your body is just the norm for today's day in age, or you can try and mitigate it how you can through the best you can do... something that will vary person to person based on ability.  Just like a lion in a zoo might chase after a hunk of meat on a track at a zoo, we might sprint to emulate hunting or fleeing.  Just as an enclosure may have fixtures emulating natural surroundings, we may surround ourselves with plants or pictures of nature.  Just as a zookeeper might fit an orphaned baby animal with a device emulating how it may be held by a parent, we wear accoutrements that simulate the natural conditions of our bodies.

None of this is a bad thing... not the most ideal situation as far as our bodies are concerned, but this is only because there's absolutely no way to reach that ideal without entirely dropping out of society, something that is also bad for most of us as a social species.

This is not a post saying "you should go out and buy all the things!"  Capitalism and consumerism aren't there to protect us, and for all of them there are other ways to mitigate this damage that can be fully or mostly DIY.  But their existence and use are not arguments against paleo or natural philosophy, lifestyle, or culture.  Those arguments are based on misunderstandings of how it works... we are not players in period reenactments who think we're doing things in some perfect ancient way, we are mitigating effects we know are happening that other people either ignore or don't recognize, in ways that are accessible to us.