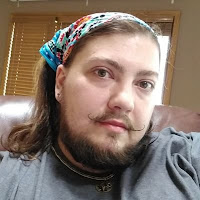 One of the parts of the Standard Trans Narrative is the notion that the way we learn about our transness is by growing up absolutely hating the things we're supposed to do to keep up the facade of our assigned gender.  It's not uncommon to see stories of trans men in which they talk about having hated the lace, the makeup, the color pink, and so on and so forth.

When I went to my gender therapist to get on hormones her questions about my past were very pointed.  In fact, when I would say I didn't remember feeling anguish over some part of my past, she would assume that I had merely repressed some deep trauma about it.

The reality is this:  My female history really wasn't that traumatic... at least as far as gender was concerned.

I was really badly bullied, and remembering back I think my relative lack of traditional femininity probably did have a lot to do with that.  But I didn't really hate my femininity, and I was interested in many stereotypically feminine things... I liked my long hair, I liked jewelry, I liked doing my nails, I liked certain cosmetics.  Most of the stuff I didn't like I was rather neutral about.  I didn't really care for dresses or high heels, but didn't hate them or feel super uncomfortable in them.

I had a style that I liked calling "camp counselor chic."  Summer camp was a huge part of my life until only a few years ago.  I even went to camp counselor related conferences!  My look was a combination of homemade hemp and embroidery floss jewelry, leather sandals, and bandanas.  I really loved bandanas, worn more like a hairpiece than anything else, to hold my hair back.

Transition changed a lot of that... but it wasn't really my own idea.

I started off by pretty much keeping the same styles I had, just with shorter hair and no makeup.  My style had come off as very "butch" before, so I didn't think it would be a big deal.  But to others, it was.  My "friends" were really invested in making me "pass," and nary a day went by when they didn't point out--trying to make it look like they weren't judging me--some stylistic choice I'd made that "wasn't helping."  My earrings were a big point of contention, and eventually I stopped wearing them.  I stopped wearing bandanas because they emphasized my feminine head shape.  I stopped wearing hemp jewelry and friendship bracelets anywhere but camp itself.

In short, I gradually started letting go of things that people said feminized me.

I never should have had to do this.  Trans men are held to a very different standard than cis men, the latter of whom are treated like some sort of feminist folk heroes if they wear feminine things.  It's not just that we were assigned girls and therefore should strive to be as far away from girlhood as possible, but a deep anxiety about the concept of a trans person who doesn't want to "pass."  This is because as a trans man who was on T long enough to permanently masculinize, I don't really get a lot of flack about it when I wear makeup or feminine things anymore... or at least I don't get any more than the cis boys rocking Instagram looks.

I've started getting a lot of this back.  Quite a bit of it doesn't really interest me anymore--I don't like colored nail polish like I did as a teen, or huge pendant jewelry--but where it does, I reclaim the shit out of it.  I also have experimented more with things I wanted as a kid and teen but was never allowed to do... fun with hair dye, jewelry for my nose, etc.

Anyway, I don't want to make it seem like genderqueerness is inherently about these things... genderqueer people have all sorts of different types of expression, including ones that look totally gender-conforming.  And I also don't want to imply that trans men who wear feminine things (or trans women who wear masculine things) have somehow crossed the line into genderqueerness.  I'm not genderqueer because I like these things, it's a function of my overall philosophical view of gender itself.  But for me, a lot of my expression as a genderqueer man has to do with taking back these stylistic elements and interests, things that I genuinely loved when I was younger and gave up merely because I was pressured into it.