A Nutrition Update (And A Gripe) 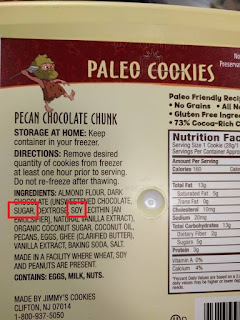 I had a huge diet win today:  I had something in my hand... and put it back.  And didn't eat it.  And I was fine.  You have no idea how big that is for me. I've been doing reasonably well sticking to a paleo/primal diet, with a few mishaps and mistakes (being only human).  I started using PaleoTrack, which I noticed finally has an app, so I can look at my sodium/potassium ratio (very important for me as I have hypertension) and my omega-6/omega-3 ratio.

Anyway, I cook most of my own food when I'm at home and then at work I eat frozen pre-packaged meals... mostly paleo-labeled meals (they're not always really paleo, which I'll write about later) and some packaged meals by Atkins and some others that aren't paleo or marketed as such but are really close.  Sometimes I make my own food and take it in containers.

Today I ate a good breakfast of eggs, kipper snacks (a canned herring product that really helps with that omega-6/omega-3 ratio), sauerkraut, and avocado.  I had a couple snacks I should not have eaten (but I didn't eat a lot of them so that's not a total loss by any means) and then for dinner my chosen family and I went to Texas Roadhouse.  This was where I had my huge win:  I reflexively reached for one of their rolls.  I had it in my hand.  For about thirty seconds I stared, bewildered.  And then I put it back.  I had their peanuts instead (not paleo, but I'm not super concerned about the occasional legume).  I had a steak, shrimp, vegetables, and a baked potato.  They put way too much salt on the baked potato, which is ironic because I chose it specifically because potatoes have a lot of potassium.  It was overall a good meal and I came home feeling pretty good.  Then I drank a probiotic beverage and here I am now.

One thing I've been irritated about is, as I sort of mentioned above, the branding of paleo.  Paleo has always had a lot of branding, but these days it's a big enough thing that you can find products labeled "paleo" and "paleo friendly" with relative ease.  While I use these products I'm increasingly pissed off by how misleading they are.  Like, how can you justify calling something "paleo" when it has literal sugar and soy in it?  Or you cut your olive oil with some other, non-paleo oil?

Then, when I find a product that actually does seem to fit the ingredients of paleo (even if it doesn't really fit into the point of paleo), it often is totally disgusting.  I had a pizza crust from Mikey's recently and wound up just scraping the cheese and sauce off of it and eating it like that.  It was inedible, insulting really.  I may as well have eaten a meatza... it would have tasted better and been a lot cheaper!

It's mostly because of that I'm trying to phase out most of the commercial paleo crap that I eat.  I don't think most of it is bad for me (the pictured cookies, for instance, only as far as I know have sugar in the chocolate--a lot of paleo eaters will eat chocolate with like 70% cacao anyway--and I don't have any personal malice against soy lecithin), but I hate that it's misleading and I hate that a diet that should be simple enough for any dipshit could do it is being misinterpreted so badly for marketing purposes.

It reminds me of when I tried getting the dieticians at a camp I worked at to make appropriately paleo/primal food.  I'd made a lot of concessions that year and said I could do potatoes, dairy, etc.  For the first two weeks they thought I was a vegan for some reason, and when I finally explained that that's not the case I was subjected to a summer of french fries and potato chips.  Yeah.